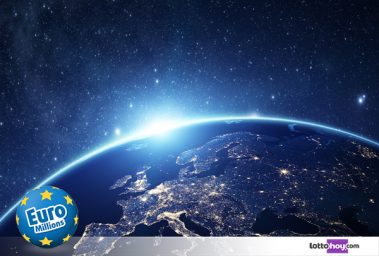 The European lottery also has special raffles that are held throughout the year, which vary depending on the country participating in this lottery.

There is an extraordinary raffle that is common to all countries, and that is celebrated 2 or 3 times in the year and on dates stipulated by the organization. It is called “Big Friday of Euromillions” and guarantees a minimum pot of 100 million euros. This super prize is similar to a regular EuroMillions draw, but with the difference of the guaranteed jackpot.

If in any of these extraordinary Big Friday draws, there was no acertante any first category, the amount planned for the pot (minimum of 100 million euros), would accumulate for the next draw and successively until reaching the limit of the pot.

Another special draw is the “Rain of Millions”, a draw in which all EuroMillions organizing countries participate, and in which players receive a combination of letters and numbers for each line played. The first letter of the combination (4 letters and 5 numbers) corresponds to the initial of the country where the physical ticket was purchased.

Complementary games of each country.

The 9 countries organizing the EuroMillions draw have established additional draws to encourage greater prizes. Let’s see some of these extraordinary draws by countries:

You can play together with Euromillions, Austria Lotto, Toto and Bingo. The bet costs € 1.30 and the top prize for the 6 figures is € 1 million. This prize is cumulative creating a pot if there are no acertantes.

My Bonus, is played jointly with EuroMillions. It consists of a random combination of 3 letters and 6 numbers, which is indicated on each ticket and which awards a prize of € 500 to the winning combination.

The organization foresees 200 winners every Tuesday, and 400 on Fridays.

All players in Spain receive, together with their EuroMillions ticket, a random combination of 3 letters and 5 numbers to qualify for a prize of € 1,000,000. There are 5 winning combinations

France: My Millón and Etoile +

My Millón, in the same way as in Spain, all EuroMillions players in France, get a random code to participate in a complementary raffle with a prize of € 1,000,000

Etoile +, it is also a complementary game of Euromillions. To participate in this draw, French players must pay an additional € 1 and in this way have the chance to win prizes for correcting the Estrella numbers, or increase the value of any prize they win in the main EuroMillions game if they correct any of the main numbers and a Star.

Ireland: EuroMillions Plus and the Ireland Only Raffle

In EuroMillions Plus, players are offered the possibility of enabling the box of this complementary draw to EuroMillions to obtain a maximum prize of € 500,000 for an additional cost of € 1.

The player must select 5 extra numbers without the stars, and will get a prize if he guesses at least 3 of the numbers of his move on the EuroMillions ticket.

Ireland Only Raffle, was introduced in September 2016 with the intention of making this lottery more attractive and Give 10 players an extra € 5,000 prize.

In the Luxembourg Joker, for an additional price of € 2, players participate with two lines of a combination of 6 numbers, and they opt for a maximum prize of € 500,000.

Extra Luxis a complement to the main EuroMillions game included in the same bet price and a prize of up to € 100,000 is offered.

The player must choose 5 numbers and get a successful prize of at least 3 of the main EuroMillions combination.

M1lhão is a complementary EuroMillions game that offers players in Portugal the chance to win up to € 1,000,000 in the Friday draw.

However, all tickets purchased for the Tuesday draw, as well as the Friday tickets, participate in this special draw, which does not entail any additional cost.

Each ticket randomly carries a combination of 3 letters and five numbers.

Mega Week offers the possibility of a special prize of £ 1,000,000 the last week of each month, to all EuroMillions players who have participated in the raffles on Tuesdays and Fridays.

In UK Millonaire Maker, all EuroMillions players in the UK participate.

Randomly, a code of 4 letters and 5 numbers is generated for each EuroMillions bet line. Two extractions are made and to win the £ 1,000,000 prize, the code printed on the tickets must coincide exactly with the ones extracted.

The HotPicks, is a game with very special features offering a maximum prize of £ 1,000,000. It is played in combination with the numbers of the winning combination of EuroMillions (the stars do not count), serving to reward the winners of HotPicks.

There are up to 5 different ways to play EuroMillions HotPicks, each bet or Pick has a cost of £ 1.5 per line.

If you choose to play Pick 2, you must choose 2 numbers, and so on until playing Pick 5, that 5 numbers would be chosen.

To obtain prizes, you must match the number of numbers chosen, so that if a Pick 3 has been chosen, 3 EuroMillions draw numbers must be guessed correctly, with only two numbers in this Pick 3 move, no prize is awarded.

Eachline costs 2 Swiss francs and to win the main prize you must match the combination in the same order, consisting of an initial letter, 3 numbers and a last letter.

The prizes range between 4 CHF for matching only the first or last digit, up to 250,000 CHF for each guesser of the 5 digits in the correct order.

In 2 Chance, Swiss players have a second chance. This complementary game introduces the five numbers of EuroMillions in another draw, to distribute prizes by matching three, four or five numbers.

The first prize consists of matching the 5 numbers drawn for this extra draw with a prize of 150,000 CHF.