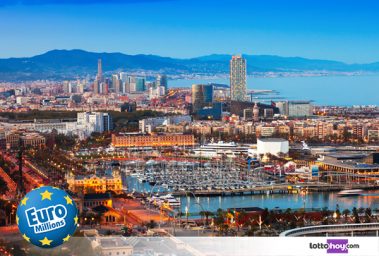 What is El Millón de Euromillones?

El Millón is a game of chance that is played in Spain jointly with EuroMillions since September 2016. The new game was created to give the participants of the main Euromillions draw an extra option to get an extraordinary prize.

In some other European Country, of those that make up the organisation of the draw, there are also complementary games of the characteristics similar to El Millón, but with a prize corresponding to the currency of the Country that organises it. Usually all in euros, except UK that pays it in Pounds Sterling (£), or Switzerland that pays it in Swiss Francs (CHF).

How to play El Millón?

To participate in the game of El Millón, there is no added cost. It is played in a free way with the EuroMillions ticket.

The Million and Euromillions, are independent games, and each one has its corresponding prize allocation, but you can not play only El Millón today without playing Euromillions, they must be played together.

It consists of a combination of 3 letters and 5 numbers that randomly prints the system in each ticket that is played, for each bet made.

When is El Millón raffled?

The draw for El Millón de Euromillones is held every Friday, coinciding with the EuroMillions draw that same day.

All the tickets that were put into play the raffle on Tuesday of the same week, also enter into a raffle, forming a bag together with the tickets on Friday. That is, all players of both draws (Tuesday and Friday) participate in the draw of El Millón every week.

The more bets are placed, the more codes El Millón are obtained and therefore the more likely to win there is.

How much can you win with El Millón?

The million, as the name suggests, awards a € 1,000,000 prize to a single winner in each draw, regardless of whether or not the prize is awarded in the EuroMillions game.

The prize of The Million, always has a guaranteed winner, since all the combinations that the system has made enter the draw, and at the end of the draw you can check the code of the million winner.

Odds to win The Million EuroMillions

You can not make an exact or approximate calculation of the odds to win the prize of El Millón unlike other types of draws where the main prize chance is 1 in the amount of numbers printed on the ticket that are put up for sale.

It is also easy to calculate the jackpot odds in so-called ball drawing lotteries, regardless of the number of main balls and extra balls that make up the winning combination. The more balls that come into play, the greater the difficulty, but there is always a mathematical calculation to know how many possibilities exist.

In the case of the million draw, there are no probabilities, but there is a total certainty that a combination will be awarded.

This is due to the fact that not all the possible mathematical combinations of 3 letters and 4 numbers enter into a draw, but all those combinations that the system randomly has printed on the different tickets between Tuesday and Friday that celebrate the draw.

The organisation can know, at the time the sale is closed to make the draw, the number of codes that come into play. But this has no interest whatsoever, because in all safety, one among all, is guaranteed the prize of € 1,000,000.

How many prizes of El Millón have been distributed?

What is El Millón Plus?

We have already spoken of the draw of El Millón, but it also saves us a surprise, and is sometimes counted, the organisation expands the number of awards dealing with the game of El Millon, creating drawings El Millón Plus.

The Millón Plus increases the winners of the same draw to 5. In other words, 5 prizes of one million are awarded to each of the winning codes.

How many El Millón Plus prizes have been awarded?

So far 3 have been the raffles in which El Millón, has become El Millón Plus, awarding 5 prizes of € 1,000,000 to each of the five combinations extracted.

We hope that, a Not long, Lotteries and State Betting, surprise us with the announcement of a new draw for El Millón Plus.

Are the El Millón and El Millón Plus prizes subject to taxes?

Yes, as it is a specific draw for players in Spain, this prize is taxed with the corresponding Spanish tax rate. At this time, prizes of up to € 10,000 are exempt from taxes, but the remaining € 990,000 have a withholding tax of 20%. As of 2020, the amount exempted from tax withholding amounts to € 40,000, and the rest will continue to have a tax rate of 20% in principle.