You can order a multiple of 4 lines only.

Mon & Wed Lotto expands the offer of lottery games in Australia with a draw on Mondays and Wednesdays every week. Among all the Australian lotteries, it is the one with the cheapest betting cost, everyone can play!

How to play the Mon & Wed Lotto

To participate in any of the two draws of Mon & Wed Lotto, you must choose a combination of six minimum numbers, from a grid consisting of a total of 45 numbers (from 1 to 45).

On draw days, eight balls are drawn at random. The first six will form the winning combination, while the last two are considered the “complementary” balls to determine lower prize categories.

Variations in the regulations to date

Like all important lotteries, Mon & Wed Lotto has undergone variations in its game regulations to better adapt to market demands and player expectations. 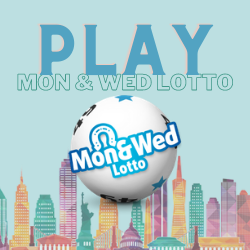 When is Mon & Wed Lotto played?

As its name suggests, the Mon & Wed Lotto is drawn twice a week, every Monday and Wednesday at 7:30 p.m. Australian local time.

Occasionally “superdraws” are held on Mondays with a special prize for the first category.

How much do Monday & Wednesday Lotto tickets cost?

At LottoHoy, you can play the Australian Mon & Wed Lotto from €1 per game column, the most competitive price you will find online for an official lottery ticket. (This amount may vary depending on the exchange rate of the dollar against the euro)

How to play the Mon & Wed Lotto?

Purchase and participate in the draws of the Mon & Wed Lotto through our platform is very simple, easy and convenient.

When accessing the game page, make the bet or bets that you wish using the columns (also called lines) that are displayed. Initially, five columns will appear, but they can be expanded as many times as desired simply by clicking on the “More lines” box.

In each column, only six boxes will be marked to set the bet. This combination can be done manually or by allowing the system itself to choose a random combination for the player. This random selection is made by placing the cursor on the column and an upper box indicating “quick selection” appears.

Once the number of columns (bets)is determined, just click the green “continue” button, and proceed to the payment through the “pay now” button.

A new screen opens showing us a range of means of payment. from credit cards and systems known as Skrill or Neteller, to a wide variety of payment methods, including through cryptocurrencies.