Minimum lines for this lottery is 2.

The Bonoloto lottery is a game of chance based on the characteristics of its elder brother La Primitiva, and is regulated by Loterías y Apuestas del Estado in Spain.

BonoLoto held its first draw on February 28th in1988, and the initial idea was to create a draw to be combined with the Primitiva with lower ticket cost and smaller prizes to be drawn on Wednesdays and Fridays.

Nowadays, this is the lottery game with the cheapest price of those that operate LAE. A single bet is only costs 1.00 EUR.

How to play the BonoLoto?

Playing the BonoLoto is really simple, you only need to choose a combination of six numbers of a column composed of a total of 49 numbers (numbered 1 to 49).

As in the case of the Primitiva, in the BonoLoto there are several kinds of bets: Single, multiple and reduced

Single bet: With a physical ticket you can play from 1 to 8 columns, which would mean one bet per column. By playing online you can bet as many columns as you want.

Multiple bet: In this case, only the first column of the ticket will be used, and you can select from 7 numbers to a maximum of 11. The more numbers that are marked, the greater the number of bets in which you participate.

Reduced bet: This bet is provided by the system itself and is usually used exclusively in the physical ticket form.

How is the Bonoloto raffle drawn?

The draw is carried out as in the case of the Primitiva, by means of two drums. In one of them the 49 balls numbered from 1 to 49 (both inclusive) will be deposited from which 6 numbers will be extracted to form the winning combination, plus a seventh ball that will be called the “complementary” number.

The “Reintegro” ball is extracted from the second drum. This number has a double function: On one hand, it serves to determine the special category or pot, whilst correcting the 6 numbers of the extracted combination, and on the other hand serves to exclusively reward  those players who hit this number, receiving the amount of a single bet as a prize.

When the Bonoloto is played?

The draws are held every day at 9:30 p.m. Spanish time in the Loterías y Apuestas headquarters.

Initially the raffle was created to be held on Wednesdays and Fridays, but nowadays there are six weekly raffles, from Monday to Saturday.
The days in which the draw of La Primitiva and the Bonoloto coincide, both draws are held one after the other independently. 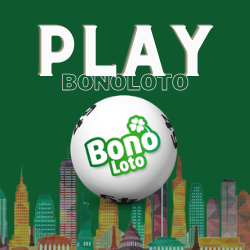 How much does a BonoLoto ticket cost?

At Lottohoy you can buy your Bonoloto tickets from €1 per column, and in order to play, you must buy a minimum of 2 bets on the same ticket.

The BonoLoto lottery is the one with the smallest ticket cost among all the lotteries that LAE manages.

How to buy the BonoLoto

Buying Bonoloto tickets and participating in all of its draws is really easy and convenient through our online platform.

When accessing the game page to make the desired bet or bets, the platform shows five columns (also called lines), but you can add more lines as many times as you wish by simply clicking on the “More lines” box.

Each column is used to place a bet, and you can fill in as many columns as you want. In each column, only six numbers will be marked to configure the bet.

The choice of numbers can be done manually or by allowing the system itself to choose a random combination for the player. This random selection is made by clicking in the “quick selection” button.

Once the number of columns (bets) is determined and the player is ready to play, you just need to click on the green button with the word “continue”.

A new screen shows us a variety of payment methods: from credit cards and well-known platforms such as Skrill or Neteller, to a wide variety of platforms, including payment through cryptocurrencies.

The Bonoloto always start with a minimum jackpot of €400,000 and from there a fund for prizes is created.

Of the total amount collected,  55% plus the amounts of accumulated jackpots from previous draws will be allocated. Another 10% is used for the payment of reimbursement prizes (“reintegro”), and the remaining 35% will be used for the payment of prizes for the remaining five categories. The funds allocated to the fifth prize category are calculated by multiplying the fixed amount of €4 by the total number of winners in that category.

Once the prize funds for the reimbursement and the fifth category have been deducted, the remaining amount is distributed as follows:

A distinguishing feature of Bonoloto’s prizes with respect to the Primitiva, is that in the event that a lower category receives a prize per bet greater than a higher category, the fund of both categories would be combined and split equally between all the winners of these two categories.