Minimum lines for this lottery is 5.

Minimum lines for this lottery is 10.

How do I play GG World Lottery?

The game screen initially shows us five columns or game lines (whose number can be expanded as many times as the player wishes, simply by clicking on the box that indicates “More lines +”) and each column or game line, corresponds to a game ticket.

The game combination can be done manually, marking with the cursor over the numbers you want, up to a maximum of five regular and two GG, or allowing the system itself to choose the combination to play randomly, marking on the “quick selection” box that appears passing the cursor at the top of each column or line.

Once you have elaborated the moves in the different columns or lines, you will have to go to the “continue” box that will show a new screen with the options of “add more tickets” or “pay now”.

Clicking on “pay now” leads to the payment platform, with various means that we make available to the player, with payment options by credit/debit cards or electronic purses in their various forms including purchase through crypto coins. 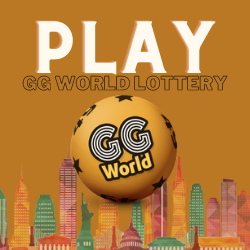 In Lottohoy you can play the GG World Lottery from 4,38 € per bet. A price reasonably adequate to the quality and quantity of the prizes offered, and that no other lottery platform can offer. (This amount may vary depending on the exchange rate of the dollar against the euro)

A total of 13 categories of prizes make up the possible combinations for winning a prize.

How do I play the GG World X Lottery online?

The development of the game is very simple, since it is the same system used in the case of its cousin, the GG World Lottery. But in this case, goes for an extraordinary guaranteed minimum prize of 9,000,000 euros, for a lower price in the bet.

The combination can be chosen manually, by checking the corresponding boxes of the desired numbers, or by allowing the system itself to randomly choose a different unique combination in each of the columns or lines you wish to play.
By moving the cursor over the top of the column, a button  indicating “quick selection” appears and in clicking it, it will generate random numbers.

If you wish to participate with a greater number of columns in the same purchase, you only need to click the More Lines button and another five columns or game lines will be opened to make up to five new bets.

Once the total number of lines or bets that you want to play has been decided (bear in mind that there is a minimum number of bets that must be played), it is a matter of paying, and to do so,  click the “continue” box  that takes you to the shopping cart where the different plays that have been requested and dates of draws are shown. If you agree, you must click on the green “pay”box which loads a selection of payment methods. 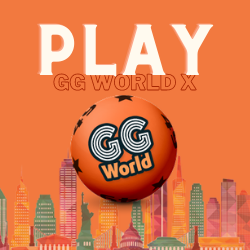 In LottoHoy you can play GG World X Lottery, from 1,50 Euro for each bet.  (This amount may vary depending on the exchange rate of the dollar against the euro). When playing a minimum of two columns, the price of each play will be a minimum of £3. A reasonably low price and very suitable for a guaranteed minimum jackpot of £9,000,000.

How many prizes does the GG World X lottery award?

The prizes that can be won in this lottery are distributed by 13 categories; the main category or jackpot with a minimum guaranteed starting value of 9.000.000 EUR.   which would grow indefinitely, in the case that there is no winner of that category in the successive draws.

How to play the GG World Million online lottery

In all cases, these three online lotteries, are based on looking for a combination of five main numbers from a table composed of 50 squares numbered 1 to 50 respectively, as well as a choice of numbers called GG, from a second part of the table in which there are 12 circles numbered 1 to 12.

You can play as many columns or bets as you wish, but with a minimum of four columns. Initially, five columns appear on the game screen, but they can be extended to another five and so on by marking over the green box that indicates “More lines” 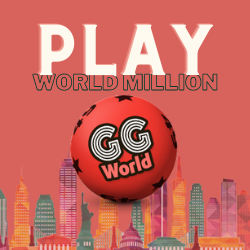 As it is an online lottery with a very reasonable  price for each line or bet, it requires a minimum of four  columns of play for each bet, and therefore the minimum amount of the play is 3 €, opting for a higher prize of 1,000,000 € (This amount may vary depending on the exchange rate of the dollar against the euro)