You can order a multiple of 4 lines only.

Powerball AU was created in 1996 and is officially supervised by the Australia government, although operated by Tatts Group.

In April 2018, a significant change was made in its rules to accommodate to the offer of other world lotteries, and in this way increase the probability of winning bigger jackpots.

Do not confuse the AU Powerball with the US Powerball, because although they have similarities, there are significant differences.

Some advantages worth taking into account, when betting on the Powerball AU are:

How to play the Australia PowerBall ?

Like many lottery games based on numbers, the PowerBall AU is composed of two different sections in each game column:

The first one consists of numbers between 1 and 35 inclusive, where you have to choose seven numbers. At the bottom is the second section in which we’ll have to choose the Powerball number between 1 to 20.

To qualify for a minimum prize the player must hit two numbers and powerball.

When is the Australia PowerBall drawn?

There is only one weekly draw, and it is held every Thursday at 9:30 p.m. local time. The ticket sale closes one hour before the draw, and once the draw is finished, it is reopened for the next week’s draw. 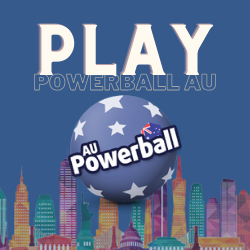 How much does the Australia PowerBall cost?

In LottoHoy, you can play the Australian Powerball from € 1.50 per column. In this lottery it is mandatory to play a minimum of four columns. (This amount may vary depending on the exchange rate of the dollar against the euro)

How to play AU’s PowerBall

Buying Australia’s PowerBall tickets and participating in all the draws is really easy and user-friendly through our online platform.

When we access to the game page, the platform has five columns (also called lines), but you can expand as many times as you wish by simply clicking on the “More lines” box

You can place a bet on each column, and fill in as many columns as you want. To set the bet,l have to mark seven squares in each column of the first group, and one round box of the second group.

Also, you have the option to allow the system itself to choose random combinations for the player. This random selection is made by passing the cursor over the column and an upper box indicating “Quick Selection” appears.

Once the desired number of columns (bets) is placed, a green box with the word “Continue” will appear. By clicking on it, it leads you to the compliance screen were you will proceed with the payment by clicking in the “Pay Now” box.

A new screen shows you an available payments methods. From credit cards and systems known as Skrill or Neteller, to a wide variety of methods, including cryptocurrencies.