How to play Eurojackpot?

The Eurojackpot lottery is one of the biggest lotteries in Europe and is a game very similar to the EuroMillions lottery. It consists of choosing at least 5 numbers, numbered from 1 to 50. Likewise, 2 extra numbers are needed, called “soles”, on the second part of the ticket, numbered from 1 to 12.

The more numbers and soles you hit, the greater the prize you will win. The first category prize is awarded to the ticket with five numbers and two soles (the jackpot prize), and then there are other 11 categories of inferior prizes.

How much do Eurojackpot tickets cost?

You can buy tickets to online play Eurojackpot online from a starting price of €3.50 per ticket. At LottoHoy we offer the best price internet price to play in the most secure platform. Open your account now and start buying official lottery tickets and playing Eurojackpot.

How to win on Eurojackpot

There is no strategy that can guarantee that you’ll be the next Eurojackpot winner. That being said, you can follow some simple advice that will increase your odds of winning and hitting any of the prize tiers: 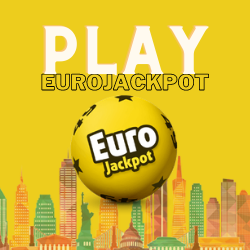 On the play Eurojackpot page, we have five initial columns per line (expandable up to eight, through the MORE LINES option).

You can select the numbers of your combination manually or let the system choose them randomly, using the quick feature we have developed. If you select just one column you’ll play a single game, so remember to play as many columns as you want.

Now also, you can choose how many draws you want to play, from 1 draw up to 16, so you don’t miss any chance to win one of the biggest jackpots in the European lotteries.

Once you have selected the column or columns in which you wish to participate, you simply need to click on continue and proceed to make the payment for your Eurojackpot Tickets.