Minimum lines for this lottery is 2.

What we know today as “La primitiva” is the oldest lottery game in Spain. Since its creation in 1763, its development was very similar to the current system, offering the choice of four numbers out of a total of 90, for that reason it was known as the “Lottery by numbers”.

This lottery was definitively called La Primitiva, as a result of the creation of a new lottery that was marketed through tickets that had printed a number with which they participated in the draws. we know it today as the National Lottery.

In 1862, the government decided to suppress the  former Primitiva draws to give a greater emphasis to the lottery by numbers, since it was having a great acceptance; and it would not be until more than a century after, in 1985, when the Primitiva lottery came back to life with the help of Loterías y Apuestas del Estado (LAE), the body responsible for  lotteries in Spain.

Variations in the regulations to date

How to play the Primitiva

To play the Primitiva you only have to choose six numbers of a column composed of a total of 49 (numbered from 1 to 49).

There are several ways to place a bet: Single, multiple and reduced bets.

A single bet cost at Lottohoy is only 2.00 Euro.

How does the Primitiva draw works?

The draw is held using two drums. In one of the drums are contained the 49 numbered balls from which the 6 numbers will be extracted for the winning combination, plus a seventh ball that will be called “the complementary”.

This complementary number is not selected on the ticket, and as its name indicates it serves to complement those bets that match five of the six numbers of the winning combination. Prize to the second category of five numbers plus the complementary.

The Refund ball is extracted from the second drum. This refund number serves to reward exclusively those players who hit this number, receiving as a prize the amount of the single bet.

When is La Primitiva played?

The Primitiva is carried out twice a week, on Thursdays and Saturdays. The draw takes place at 9:40 p.m. Spanish time, in a public ceremony in the  Loterías y Apuestas del Estado (LAE) draw room in Madrid.

The regulations of the Primitiva foresee the possibility of altering the place, the date and time of the celebration of a draw or a modification of dates. 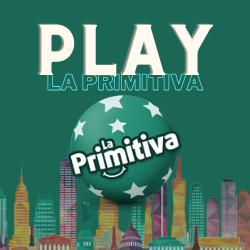 How much does a Primitiva ticket cost?

At LottoHoy you can play the Primitiva from a starting price of €1.5 per column.

Although officially, only residents in Spain can access this game, nowadays and through online platforms, you can access the purchase of tickets and participate in the draws from any country.

How to buy La Primitiva online?

Purchase and participation in the Primitiva raffles through our platform is very simple, easy and convenient.

When you access the game page, you can place the bet or bets you want using the columns (also called lines) that are displayed. Initially, five columns will appear, but they can be expanded as many times as desired simply by clicking on the “More lines” box.

In each column, six numbers will be chosen to configure your play. This combination can be done manually or by allowing the system itself to choose a random combination for the player. This random selection is made by placing the cursor on the column and an upper box indicating “quick selection” appears.

Once the number of columns (bets) has been determined and the player is ready to play, a green “continue” box appears.

Once in the cart, a new screen that shows a range of payment methods appears: from credit cards and systems known as Skrill or Neteller, to a wide variety of national payment methods, including through cryptocurrencies.

Prizes of the Primitiva

Fifty-five percent   of each draw collection goes to the payment of prizes, 10% is destined for the payment of the reimbursement, and of the 35% remaining the amount corresponding to the fixed payment of 8 € will be separated for each fifth category winner, and the rest is divided between the four  main categories plus the special category.

The amount of the prizes obtained is entered directly into the registered users’ accounts.