Megalot the largest lottery in Ukraine 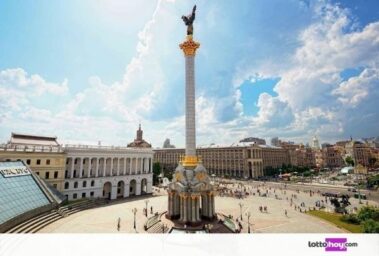 Megalot is one of the 80 state lotteries and games that M.S.L. has in its portfolio, duly licensed by the Ministry of Finance of Ukraine.

Megalot is currently the leading lottery operator in Ukraine and is managed by M.S.L. (MolodSportLoto), which has managed to position itself firmly in the whole of Northern Europe, with more than 6,500 lottery distribution and sales outlets in the territory.

It was created to compete with the former USSR’s “Sportlotto”, which had dominated the market for almost 50 years. The birth of M.S.L. can thus be considered to have taken place in 1970, although the Megalot lottery was not created until 2001.

In the course of these years, Megalot has undergone some changes in its rules, always in order to improve the offer and make it more attractive to players.

Some of the most important changes were: the introduction of the Megakulka ball, the change of the lottery reels, the fixing of the Megaprize as the second most important prize after the top prize.
The Megalot is the only lottery in Ukraine that draws two prizes of this magnitude at the same time, the MegaJackpot and the above-mentioned Megaprize.

The ticket consists of several columns on which you can place your bet. For a simple play, it is sufficient to fill in the first column, 6 boxes numbered between 1 and 42, in the first box, and an extra number (Magakulka) in the lower box between numbers 1 and 10, in order to be able to double the winnings.

The player can decide whether to play a single or simple bet by marking the 6 numbers of his combination and a Megakulka in the first column, and make further plays in the following columns. So each filled column means one bet.

Multiple bets can also be placed if you wish (in this case, only using the first column of the ticket) and marking up to a maximum of 10 numbers from the first grid between 1 and 42, and up to a maximum of 9 numbers from the Megakulka). This will multiply the chances of winning, but also the cost of the bet.
The bet can be placed directly by marking on the ticket the combination of the main numbers (both for the single bet and for the multiple plays) and the Megakulka according to the choice between 1 and 10 numbers; although if the player wishes, he can decide for the automatic play, and the system itself will be in charge of the random selection of the winning numbers.

Through online lottery platforms that offer this game, it is possible to play Megalot from anywhere in the world, with a simple internet connection.

However, lotteries from all over the world are available to play, from the most popular lotteries such as the American Powerball and MegaMillions, to the European EuroMillions, Eurojackpot and SuperEnalotto.

Price of the game in Megalot

The cost of a ticket with a single combination and a single Megakulka is 5 UAH (approximately 0.17 €).
You can select more than one Megakulka, for the additional price of 1 UAH each number up to a maximum of 9, being the total amount payable in this case of 14 UAH.

It can be purchased at any of the distribution points, at kiosks, post offices, supermarkets, terminals, as well as using the Internet service. All bets are recorded in real time.

In this lottery there is no minimum amount for MegaJackpot winners, but the amount for the first category and the other categories depends on the amount collected from the sale of each draw.

This Ukrainian lottery does not limit the growth of the jackpot, and taking into account the odds of hitting a first category combination, it is common for the jackpot to reach very high amounts.

52% of the proceeds of each draw are set aside for prize payments, and we can see an estimate of the prize in the box below:

How are Megalot prizes paid out?

Megalot prizes, if unclaimed, expire 180 days after the draw.

Prizes from this lottery are subject to a 19.5% tax for residents.

It is advisable to check the tax laws in the non-resident player’s country of residence for any other local taxes to which they may be subject.

Odds of winning a prize in Megalot