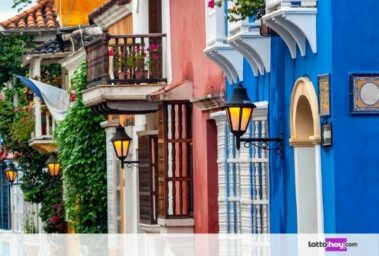 taloto lotery was created in 2001 and is currently the most played lottery in Colombia. Unlike other lotteries in this country, the Baloto is an online lottery, which offers the player the possibility to play up to 5 games with the same ticket.

How do I play the Baloto lottery?

The Baloto lottery is drawn every Wednesday and Saturday at 11:00 p.m. in Colombia.

To participate in Baloto, the player must choose 5 numbers from a table containing numbered boxes from 1 to 43, and also choose a super Balota in another box with numbers ranging from 1 to 16.

The minimum guaranteed jackpot is 4,000 million Colombian pesos (approx. €1,118,000), which will be accumulated for successive draws in case there is no winner.

How to win in Baloto?

Baloto has a prize plan divided into 8 categories, with a distribution of the prize fund.

Once the draw is over, the scrutiny of all the validated bets that participate in the contest will begin, in order to assign the prizes that correspond to each category.

A complimentary prize is also established by drawing a seventh ball called Complementary and is intended to also offer a prize to the winners of 5 numbers who also match this complementary number (5+ complementary).

A prize is also obtained when the number designated as Reintegro, coincides with the ball that is drawn in the draw destined for this prize.

The remaining fund (45% of the collection) will be distributed as follows:

When the number designated in our ticket as Reintegro coincides with the ball that is drawn in the draw, the amount of the bet or bets played in the ticket will be paid.

What is the Baloto ticket price?

What is the probability of winning the Baloto lottery?

What taxes are paid when winning the Baloto?

The prizes won have withheld for tax payment (occasional gain) of 20% plus a discount for the tax on financial movements (GMF) equivalent to 4 x 1000 on the gross value obtained.

Baloto lottery vs Spanish and other European lotteries

It is always interesting to make a comparison between lotteries in Colombia vs. lotteries in Spain and Europe. Games of chance that we usually play in our respective countries.

First of all, we are going to make a comparison analyzing the most important lotteries in Colombia, answering some of the most recurrent questions, among which are: Which is the best lottery? Which one has better odds and is easier to win? Which one is the one that falls the most? And then we will see what the difference is with respect to the lotteries in Spain.

In Colombia, along with Baloto, there are also several lotteries based on the so-called number system, i.e. a ticket with the numbers printed on it.

The Spanish National Lottery is very similar in its various draw formats: ordinary draws on Tuesdays, Thursdays and Saturdays. A special draw, which is usually held once a month, and the more well-known extraordinary draws such as the Christmas draw (el Gordo de Navidad) and the extraordinary El Niño draw (coinciding with the Epiphany holiday).

With the appearance of online lottery systems such as the Colombian Baloto and/or the Spanish, Primitiva, BonoLoto, El Gordo de la Primitiva and even the pan-European Euromillions and Eurojackpot, there has been an important shift towards these new lotteries which allow the player to participate more personally in the configuration and to choose the combination of his bet.

The common denominator of these lotteries is that the player can choose the numbers he wants to play, in order to configure his bet. This opens up a huge range of predictions.

Generally, you can choose the numbers of your combination manually, by marking the numbers directly on the physical or virtual ticket, or if you wish, you can let the system itself randomly choose a different combination for each bet you wish to place.

Odds of winning a prize